Is it really possible to genuinely not care what people think? My thoughts based on the ‘Friends’ TV show characters Rachel, Phoebe, and Monica 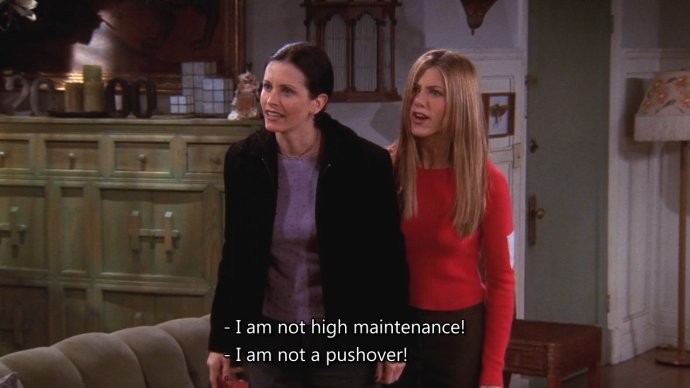 We’ve all heard it a thousand times: ‘who cares what people think?’ Well, I definitely think it’s easier said than done! I’ve been thinking about this lately and somehow this episode from Friends TV show emerged in my mind, so I decided to share my thoughts on the subject 😊

Friends might be not the best show of all time, but it’s a really good one. It’s entertaining, funny, and sometimes the writing is excellent. I like it because the show doesn’t take itself too seriously – I can watch and not think about the meaning of the events at all or dig deeper, and it’s totally up to me. I think the particular topic of caring what other people think is a recurring topic in the series and for a good reason – we can all relate to it.

The episode I’m focusing is the seventh episode in the sixth season – “The One Where Phoebe Runs”. The premise is that Phoebe and Rachel live together and Rachel suggests they go jogging together, but then it turns out that Phoebe runs weird (galloping and swinging her arms around), and Rachel lies in order to be able to run alone – she’s embarrassed by Phoebe. Later on she admits it to Phoebe and gets called a people pleaser and ‘pushover’ for caring a lot what people think, while Monica – ‘high maintenance’ for being a control freak.

When Rachel admits to Phoebe why she doesn’t want to jog with her, Phoebe asks:

Phoebe: Why do you care?
Rachel: Because they’re people!
Phoebe: People you don’t know and will never see again.
Rachel: Yes, but they still are people… with eyes!

It’s interesting how in this episode Phoebe is portrayed as the one person completely free of any worries like ‘what people will think about my abnormal running style?’ however that’s not who she really is. In one of the first episodes where Rachel’s Paolo makes a pass at Phoebe, Phoebe says that her friends are the most important thing in her life (Season 1, Episode 12). In the episode ‘The One With The Kips’ (Season 5, Episode 5) Rachel says that she thought Phoebe would be the first to leave the group because she lives far away, which deeply upsets Phoebe.

The truth is, it’s impossible to completely and genuinely not care what other people think. Humans are social creatures and we exchange emotions, we seek friendship and someone to relate to, someone to confide in. Social connection is crucial for human well-being and health. The real question here is ‘whose opinion exactly matters?’

In my opinion, despite that Phoebe is the ‘flaky’ girl in the group, she has the healthiest approach to what other people think. She does care, but only about what people who matter to her think. Rachel always dresses to impress and is used to attention, while Monica is insecure in many ways and having control over everyday things helps her feel more secure. Both Rachel and Monica often worry about how they look in front of people, which ultimately causes them to fuss a lot more than Phoebe does and doesn’t make them feel any happier or more content.

One of the best pieces of advice I’ve ever gotten was ‘keep your inner circle small’ and it serves me well. One way or another, always being concerned about what people think is a tiresome burden that doesn’t allow focusing on our inner selves, on what we want, what makes us content. Trying to fit everyone’s standards is a fruitless endeavor, because ultimately it means not fitting anyone’s standards, but above all – our own.

I find it quite awesome how all three girls in ‘Friends’ grew over time. All three of them learned to live their lives their own way.

Who was your favorite character on ‘Friends’ (if you watched this show, of course)? I’m incredibly curious to know!

Thank you so much for taking the time to read ❤️

P.S. If you’d like to get notified every time I post, subscribe to my blog below. The quality of my content is very important to me and the only way I’ll develop this blog is by contantly improving it. I sincerely appreciate every subscriber and invite you to embark an a creative journey! No spam guarantee – only notifications about my new posts

12 thoughts on “Is It Possible To Genuinely Not Care What People Think? A Closer Look at Phoebe, Monica, and Rachel from ‘Friends’ 😊”

Follow You and Me and Cup of Coffee on WordPress.com